Duel of the Space Telescopes: Hubble vs. Webb 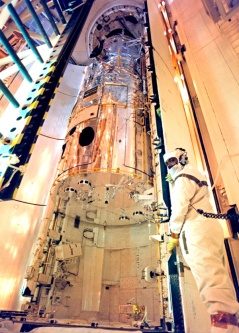 In 1990 I joined NASA at Kennedy Space Center as a bright-eyed engineer straight out of college, and the Hubble Space Telescope was inside the payload bay of the Space Shuttle orbiter Discovery at launch pad 39B. I stood and looked up at the amazing sight and was completely awed by it – the photo at left shows same view I had while I stood around, feeling like a fifth wheel as a young engineer in training. Since the iconic telescope launched, it has delivered amazing imagery from deep space, and far surpassed even the most optimistic assessments of what it could do.

But move over, Hubble, Webb is almost here. The Hubble Space Telescope is a household name, but few people outside of the space industry have heard of the James Webb Space Telescope, now preparing for launch. Billed as the successor to Hubble, it is scheduled to launch in October of 2018. Yet, Webb is very different from its predecessor, and promises to deliver science that the designers of Hubble could have only dreamed about. This post will compare and contrast the two telescopes, highlighting both similarities and differences.

Hubble launched on Space Shuttle Discovery in April 1990. Webb will launch on an Ariane 5. Hubble fit in its entirety, fully constructed, into the payload bay of the orbiter. Only its solar panels did not fit in its operational configuration – they had to be deployed in orbit. By contrast, the Ariane 5 rocket is capable of launching similarly sized payloads, but the Webb telescope is significantly broken down for launch, and must put itself into its final configuration on orbit. Hubble had loving hands of astronauts available to help it deploy. Interestingly, when it comes to launch mass of each, the larger Webb weighs in at about 6500 kg while Hubble was approaching twice that at 11,110 kg.

Hubble has a 2.4 meter diameter polished mirror. Webb has 18 gold-plated beryllium hexagons that get assembled into a 6.5 meter diameter mirror. This equates to about 7 times the surface/collection area. The larger the area, the higher resolution. In a real world comparison, Hubble is about the size of a school bus. Webb is as long as the wingspan of a 737 jet.

Hubble is in a near-Earth orbit of 570 kilometers. The Webb telescope will be much farther away – outside the moon’s orbit of 384,400 kilometers at a point 1.5 million kilometers from Earth. That may seem like a big difference, but the biggest difference is that Hubble orbits the Earth. Webb will be in a position that actually orbits the Sun. It will be at what’s called a Lagrange point, or a point in space where the gravitational influence from celestial bodies essentially keeps its position the same relative to those bodies. Just like telescopes on Earth are located far away from human habitation to limit light pollution, Webb will be outside most of the heat pollution from Earth as a whole. Being at the Lagrange point will allow it to keep itself oriented in one primary direction relative to the Sun without performing any maneuvering. Why is this important? Read on.

What Can They See?

Hubble can “see” in wavelengths ranging from ultraviolet to visual to a little into infrared. It’s limited in infrared because it heats up in the sun and that causes problem with that spectrum. On the visual side, it turns out that good old fashioned light is not a great thing explore the universe with. Cosmic dust and gas that the light travels through to reach the telescope has somewhat of a scattering effect on it. Infrared is far less affected by it, and that’s what Webb “sees” with.

The big sail-looking thing on Webb is a sun shield. It will constantly be between the Earth/Sun and the telescope itself, and is very well insulated. On the sunny side, the temperature will be a balmy 185 degrees F (85 Celsius). On the shaded side it will be a frigid -388 degrees F (-233 C). Talk about keeping the hot side hot and the cold side cold… Since the telescope is kept so cool, it’s easier for it to pick up lower level infrared sources. Between the size of the mirrors and cool temperatures, Webb will be able to see much more distant objects and get better views of nearer objects.

The image below shows the same image in visual and infrared.

It might sound like Hubble is losing big time to Webb. It should, actually, since it was launched more than a quarter century ago. It’s like the little engine that could – it just keeps going. Webb is designed for a 5-10 year life. Who knows, it could outperform its expected longevity just like Hubble did. The big issue with Webb is that if something breaks down on it and it needs some mechanic work, you can’t send someone out to fix it (like was done with Hubble). If it breaks, it’s done. So, Hubble gets a big win over Webb in this category.

Barring an incident that damages the telescope, Webb will win out against Hubble in the “researching the universe” contest. But that doesn’t mean Hubble is done. There are currently no plans to shut it down and it is believed it will continue operating until at least 2020. Frankly, I’d give it a decent shot of outliving Webb. Regardless, it is likely that both will operate concurrently, delivering revolutionary science on the origins of the universe.