SpaceX joined a very elite club of heavy lifters today (Feb 6, 2018), when it successfully launched its Falcon Heavy rocket. The company now boasts the most powerful launch vehicle in existence, and the second most powerful ever (Saturn V).

Okay, time to turn off the news speak mode, and take this to a personal level. This launch brought back a feeling I haven’t experienced in a long time – one of intense pride in the American ingenuity and drive in the space race.

I had been at an appointment in the city (San Francisco), and was returning home. Planning to watch the launch, the minor delays gave me just enough time to stop by Mediterranean Burger to get a chicken shawarma plate for lunch. As an aside, these guys make some pretty good shawarma, and their humus… well, let’s get back to the launch. I made it home with a few minutes to spare, but our golden retriever puppy was letting me know in no uncertain terms that he needed to go outside.

This is Bodhi after being a very bad dog in the mud.

So, I rushed the pups outside, and rustled them back in with less than a minute to spare. The anticipation was overwhelming. When the engines first fired, all I could say was, “oh, f$&k.” The excitement flowing through me was unprecedented.

As the Falcon lifted off the launch pad, I kept repeating those words. My other dog, Ava, sensed my emotion, and began barking along with me. Bodhi didn’t know what to do, and just started jumping around.

Watching the Falcon Heavy clear Launch Pad 39A, was a thing of beauty, made even more special by my connection to the launch complex. I spent many a long night and hot day preparing Space Shuttles for flight at that very spot. Seeing this technological marvel pulling away from a place so special to me brought chills to my body. Then came the anticipation. First, for the “go for throttle up,” where the vehicle passes by the area where the greatest air pressure is exerted upon it. Until that point, the main engines are throttled back so as not to put unnecessary stress on the vehicle. It was shortly after this point that the Space Shuttle Challenger disaster occurred, so hearing those words always makes my heart skip a beat. Once safely past, the next question was, would the vehicle make it to booster separation?

Of course, it did, and it was one of the prettiest views you could hope for. All I’ve got right now is the split screen showing the views from each booster (bottom), and the more panoramic view at the top. I hope we get a high resolution version of that top image. What a view with the Earth in the background. 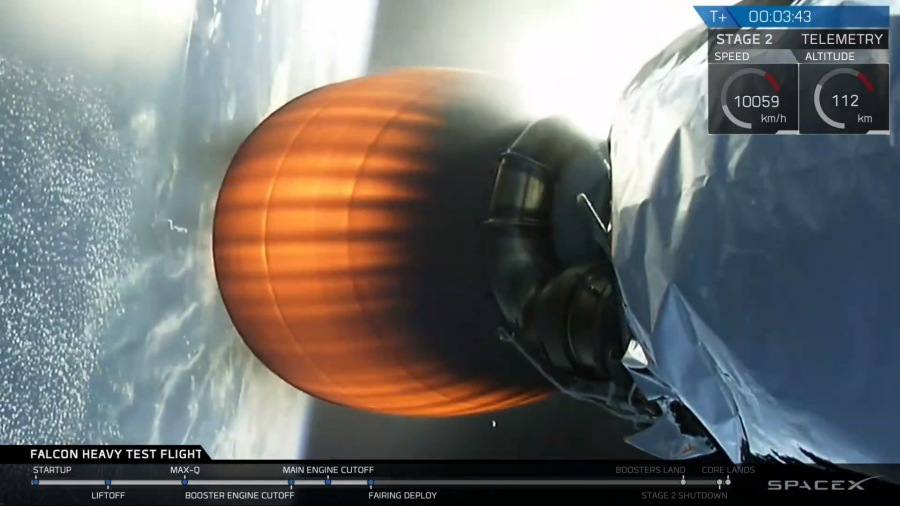 Then the upper stage ignited. Again, what a view–what an absolutely magnificent view as the rocket carried its payload to space. And just what was its payload? Well, only Elon Musk would carry his own personal Tesla Roadster into space with a dummy in a space suit behind the wheel, and the words “Don’t Panic” emblazoned across the car’s display. Now, this is funny–very, very funny. Well played, Elon.

So, the launch was a resounding success. It’s over, right? Not so fast. One of SpaceX’s claims to fame is its ability to recover its boosters by bringing them back through the atmosphere, firing retrorockets to slow them down, deploy landing legs, and put them right back down near where they took off. This is no easy task, and YouTube is littered with fantastic failures of these boosters toppling and blowing up.

Today, with the world watching, SpaceX pulled this off to perfection, with both boosters landing in glorious fashion right next to each other. The main booster was supposed to land on a floating platform in the Atlantic, but we have yet to hear what happened to it. My guess is that because the feed was cut, it didn’t make it, and SpaceX didn’t want the last thing people saw of the launch to be a booster blowing up the landing ship. Even if that is the case, it simply does not matter.

This launch was more than a private company putting a rocket into space. This launch was a technological marvel of a private company launching the most powerful rocket in existence with the heaviest lift capability since the Saturn V – by nearly a factor of three! And on top of all that, the company successfully brought back two boosters from the launch, in perfect unison, to land right next to each other. There is no better word to describe this feat than… amazing.