ESA’s Moon Base and How it Gets Us to Mars

The European Space Agency (ESA) recently formalized plans to send missions to the moon beginning in the early 2020s, with manned missions following by the middle of the decade. By 2030, they hope to have a permanently manned base. With NASA shooting for the search for life on Mars, ESA’s moon missions and base may seem pedestrian by comparison. It’s less sexy, less ambitious, and less interesting. At the same time it’s more attainable, more practical, and more necessary for the future of space exploration.

How is ESA Going to Do It? 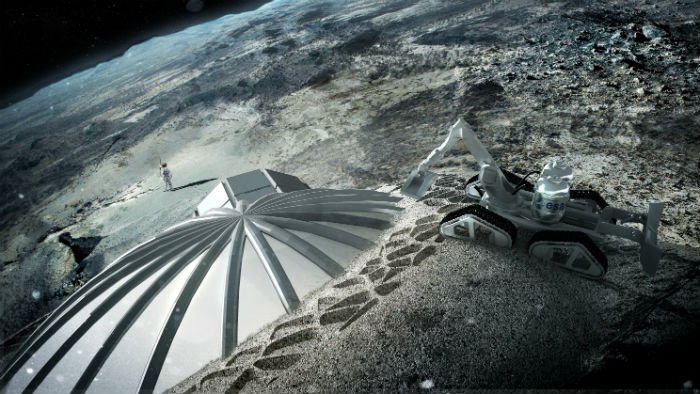 The initial missions setting us up to return to the moon will be tasked with better understanding what resources the moon has to offer. Can they assist with living there, and help further exploration of the solar system? The first such mission is slated for 2020, when ESA sends the Russian Luna 27 mission to one of the moon’s poles to collect samples. Three years ago, I wrote about 3-D printers being the key to space exploration and colonization. The basic idea I wrote about was to take raw materials with you and use them to efficiently make the parts you need on a far-away colony. ESA is taking the idea one step further by planning to use resources actually harvested on the moon as the 3-D printing material. Lunar material would be combined with magnesium oxide and a post-printing binding salt to create a stone-like substance.

Early lunar missions will see astronauts in orbit controlling harvesting and building robots. This dramatically decreases the cost of getting a base in place. That those resources are the type that can be used still needs to be proven. If it does show to be true, a moon base is in the cards.

What Does it Mean Once the Base is Built?

Before I write about all the great operational benefits of a moon base, I have to first talk about the science. The most popular theory about how the moon was formed is that 4.5 billion years ago, what was a smaller, moonless Earth was hit by a Mars-sized planetoid that shared an intersecting orbit – think about what that collision must have looked like. I don’t think words could describe it. A significant amount of each body was stripped free. As the more massive of the two bodies, Earth inherited more of that debris and became the planet we know and love. The unnamed planet got less and became trapped by the new Earth’s gravity – and became our moon.

Now think about what happened since the moon joined us. The Earth coalesced, life formed and evolved, there have been countless cycles of change. Very little of what was there remains as it was – except on the moon. Nothing has substantially changed there in billions of years. It represents an opportunity to glimpse the building blocks of both our planet and the solar system as a whole. The science to be gained is unfathomable.

While not on the same level as the science opportunities, the operational benefits are likewise significant. If it proves out that the resources necessary for space exploration are indeed present on the moon, then it means that instead of launching them from Earth’s one gee, we only have to do so from the 1/6th gee gravity of the moon. There is also the fact that the moon has no atmosphere to overcome, no friction to slow things down. Supplies necessary to go to Mars and beyond could launched off the surface of the moon with an electromagnetic mass driver – like a giant electrical version of the steam-powered catapults that propel aircraft off carriers. Gone would be the huge rockets and fuel. All that would be there would be the supplies – no wasted mass. It is an extremely efficient mode of launch. To put it into perspective, per NASA’s fact sheet, a fully loaded SLS Block 2 launch vehicle – NASA’s next generation heavy lift cargo vehicle – weighs in at 6.5 million pounds and has a payload capacity of 140 tons, or about 280,000 pounds. In other words, nearly 96% of the mass launched from Earth is used up just to get the remaining 4% into orbit. Doing the same from the moon with a catapult means you get that 96% back.

No one is happier about the prospect of an ESA moon base than NASA. By one estimate, 2/3 of the cost of an individual Mars mission could be alleviated by getting most of the supplies from the moon – a potential savings of up to $10B per year.

Where Would the Base Be Located?

Current plans are for the ESA moon base to be located at moon’s south pole. The region offers two critical features: dark areas permanently shaded from the Sun; and tall peaks that are permanently in sunlight. Why is darkness good? Where there’s light, there’s heat. Where there’s not, it’s cold – really cold. Any water or other liquids have long ago boiled away from the lit areas of the moon, but on the dark areas they likely still exist in their frozen state, ready to be used. The most important of these is, of course, water. On the peaks, solar farms could be built to provide uninterrupted power.

Summing it All Up

NASA’s planned manned Mars missions have garnered most of the headlines over the past few years, the ESA moon base arguably means more to the future of manned space exploration. What is most  encouraging about the endeavor is the timeline. That manned moon missions could resume so quickly bodes well for humanity’s future among the stars.