The new Audi Lunar Quattro has been introduced to the public. This week at the North American Auto Show in Detroit, a distinctly non-Audio-looking Audi was on display. It was the auto company’s entry in the Google Lunar XPrize competition. 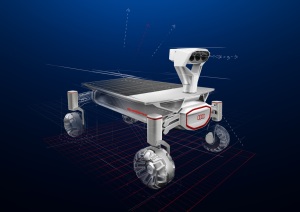 The contest has a pretty grand goal: Each entrant in the contest needs to land a rover on the moon and move 500 meters on its own. To prove the feat, they must each photograph their journey. It seems amazing to me that what once took entire countries to do, Google is getting private teams to do as part of a competition.

Audi plans to launch their rover in 2017. Actually it will be two rovers, and as part of their mission, one will visit the Apollo 17 landing site. Part of the photographic evidence of the journey will involve examining the NASA lunar rover which was dropped off more than 40 years ago. Audi is interested in learning how the NASA rover has weathered over the years.

One thing seems clear about Audi’s foray into space technology: it isn’t just about the XPrize. While the company’s contest entry looks distinctly rover-like, two designers at Audi, given a blank slate to come up with what their optimal rover may look like, have come up with something far more advanced.

Instead of wheels, one concept rover has four balls that can move in any direction, giving it maximum maneuverability.

“This is my vision of a maximally efficient and technologically advanced quattro with optimum grip on the lunar surface. It can rotate 360 degrees and freely move all four wheels like arms.”

And the designs don’t stop at ‘cute little rover size’ vehicles like Audi’s XPrize entry. The idea is to create models large enough to carry people and allow efficient exploration. The goal is to have it not only be a transport vehicle, but also a scientific one. One of the design ideas is a “working mode” that allows a scientist on board to collect work on the surface without having to leave the safety of the rover.

“It moves like an animal and can collect samples.”

Audi is one of sixteen teams to have entered the Lunar XPrize competition. While all the entrants seem to have great technology, Audi clearly has plans that go far beyond the contest. They are giving their moniker “quattro” a whole new dimension.