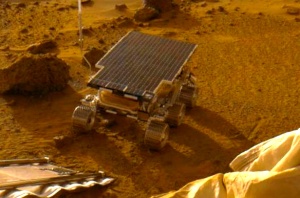 On July 4th, 1997, the Sojourner rover touched down on Mars as a part of the Mars Pathfinder mission. It proceeded to send back an amazing array of imagery of the Martian landscape that captivated the world. Rovers are great planetary explorers, but they have their limitations. They can’t go up or down too steep a slope and can get blocked by a myriad of geologic formations. Also, while great for relatively flat, open spaces on a planet like Mars, they don’t do so well on surfaces of celestial objects with very low gravity where the wheels can’t generate enough friction to move their rover. Put a rover on an asteroid and its wheels will spin like its stuck in wet Virginia clay.

Astronika, a Polish space company, has developed an novel solution to the low gravity rover problem. The Galago Highland Terrain Hopper – also called ‘the Hopter’ – gets around by literally hopping across the surface of the planet/moon/asteroid/comet it happens to be exploring. According to the Astronika web site, it weighs only 2 kg and can jump up to 4 meters high on Mars and 9 meters on the Moon. I couldn’t find any hard data on what kind of distance it can cover in a single hop, but I did find a reference to a planned 5 km trek (bounce) taking 1000 hops – or 5 meters per hop – presumably on Mars. This mode of transport allows it to get into valleys and crevices or climb steep slopes.

The Galago gets around using three specially designed legs that can hop, flip it over or tilt to use an experiment or prop up on a slope. It is light enough that multiple units can be part of a mission. Imagine an army of these little things hopping all over a Martian crater. It would be quite a sight.