The New Space Race: Elon Musk Will Beat Everyone to Mars

A few weeks ago, Elon Musk announced his ambitious plan to have SpaceX send an unmanned Red Dragon capsule to Mars in 2018. Yesterday, he upped the ante, saying that he anticipates sending the first manned mission in 2024, which would arrive in 2025. There is still much that is unknown about Musk’s plans. All we know right now is that he is shooting for that 2018 launch when Earth and Mars are closest, then another mission every 26 months. The overall architecture for the venture might be revealed as early as September – one thing is for sure: the 21st century version of the space race is on…

Who is SpaceX Racing Against?

A Dutch non-profit company called Mars One is also planning for a colony on Mars. Their road map calls  for crew training to begin next year with their first unmanned mission launching in 2020. A rover mission would launch in 2022, a cargo and hab mission in 2024, and finally the manned mission in 2026. They will then rotate crew through every 26 months.

When you look at the schedule, it looks on the surface that Musk and SpaceX have a two year lead. However, when you consider that missions can really only take place every two years, if SpaceX misses its 2018 goal, then the next opportunity wouldn’t be for another 26 months – the two would be in a dead heat, potentially launching essentially at the same time. 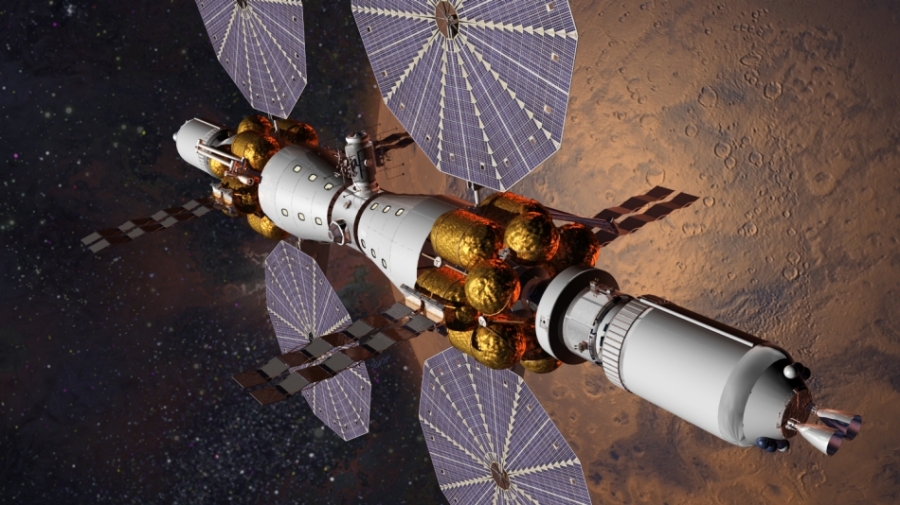 Another competitor, albeit one that is much further behind, is Lockheed-Martin and its Mars Base Camp space station. The planned launch is not until 2028, so it doesn’t seem that this is a competitor for first to Mars, but it could be a winner of “permanent presence” race, if there is such a thing.

What are the Challenges?

The biggest challenge for SpaceX is that it currently doesn’t have a vehicle to carry people to Mars. The Red Dragon capsule that will essentially be a demo mission in 2018 is about the size of an SUV.

“The 2018 mission would be a Dragon Version 2. I wouldn’t recommend travelling to Mars in that. The trip for Dragon would be on the order of six months… it’s a long time to spend in an SUV, I think,” Musk said to laughs from the crowd. “It also doesn’t have the capability of getting back to Earth… we can put that in the fine print,” he continued to more laughs.

There is also the fact that none of this has been done before. History has told us that things happen on long missions like those to Mars. They are complex and, by necessity, require a lot of human involvement – that opens the possibility for error. A prime example was the Mars Climate Orbiter that slammed into the planet because the contractor on the mission used English units and NASA used metric.

Still, nothing breeds success like competition, and Elon Musk is one of the most competitive people on the planet. If anyone can make it to Mars in the time frames advertised, it would be Musk and SpaceX. You certainly don’t want to bet against him.

Image credits: Composite made from SpaceX images, Mars One, Lockheed-Martin.