The Defense Advanced Research Project Agency, or DARPA, is known for conceiving and testing some pretty advanced (read: cool) stuff. One of the projects getting closer to fruition that is drawing considerable attention, both technological as well as fiscal, is their XS-1 launch vehicle.

Billed as the next generation Space Shuttle, the XS-1 will be a reusable launch vehicle that will take payloads into space. Currently three contractors are in the mix to build the new spacecraft: Boeing, Northrup Grumman, and a partnership between private companies Masten Space Systems and XCOR Aerospace. It is assumed that each of the three has received an equal share of the estimated $50 million spent to date on the project. Each also has its own design take.

So will it really be the next Space Shuttle? There are many differences between NASA’s iconic launch system and DARPA’s new endeavor.

It takes a lot of umph to get something into orbit. The Space Shuttle was launched with three powerful main engines (750,000 pounds of thrust each), two solid rocket boosters (1.5 million pounds of thrust), and required a massive external tank with more than 146k gallons of liquid oxygen and 395k gallons of liquid hydrogen. It took all this because it was launched into a low Earth orbit.

The XS-1 will act more like a ballistic missile, flying high enough to be in space, but without enough speed to actually attain orbit. At the apex of its flight, it will launch its payload with a secondary rocket to give it the necessary velocity to get into its desired orbit. By not having to carry the full weight of the launch vehicle into orbit, significant savings are made in the amount of fuel and oxidizer that must be carried. 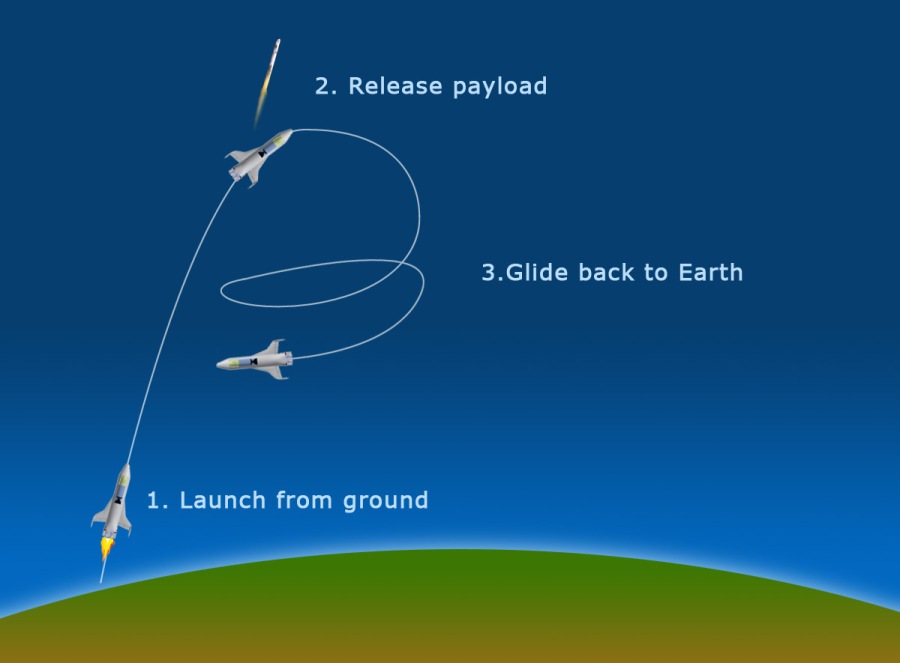 It Will Cost a LOT Less

In 2011 dollars, a single Space Shuttle launch cost about $450 million. The goal of the XS-1 will be about $5 million per flight. To be fair, it’s not an apples to apples comparison. The XS-1 will take small payloads up to a couple tons. The Space Shuttle carried multiple payloads with a typical launch weight of 25 tons. Still, the cost per ton of the Shuttle is about $18 million/ton vs. $2 million/ton of the XS-1. Comparing it to more modern, private launch mechanisms, the XS-1 would represent a roughly 90%+ savings.

It Will Take a LOT Less Time to Refurbish Between Flights

Time between flights of a given Space Shuttle orbiter could range upwards of a year or more. Between pulling the old payload out of the payload bay, refurbishing the orbital maneuvering system, replacing damaged tiles of the heat shield, removing, refurbishing and replacing the main engines, etc., it took a long time to get any given orbiter ready to fly again after a flight. Then it had to have its new payload put in, be mated to its external tank and solid rocket boosters in the vehicle assembly building, and finally rolled out to the launch pad on board one of the crawlers.

The design goal of XS-1 is to do ten missions in ten days.

It Will Not Have a Crew

The Space Shuttle was a manned launch vehicle. It could carry a crew of up to seven into orbit. XS-1 will be unmanned, essentially a drone. This allows it to save critical weight otherwise needed for crew life support, as well as for safety measures to allow for the crew to escape in case of an emergency.

The timeline for the XS-1 is short as far as new launch systems go. DARPA’s requirement is to have a first flight by 2020. The program represents yet another exciting entrant into the ever growing family of modern, new launch vehicles. It will be fun to see where this one goes – if we are indeed allowed to see it.