In the outer reaches of our solar system, the bright little dwarf planet Makemake lurks in the darkness of the Kuiper Belt. On April 26th, the Hubble Space Telescope detected a small, or at least relatively small, dark object orbiting it – Makemake has a moon.

What is the Kuiper Belt? 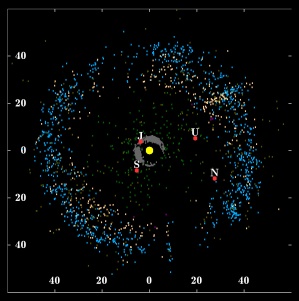 The Kuiper Belt is sort of like the asteroid belt: it’s a ring of objects that orbits the Sun. This ring, however, is much farther out – it encompasses the area in a ring ranging from outside of Neptune’s orbit to 50 astronomical units (AUs – the distance from the Sun to Earth). The chart to left depicts every known Kuiper Belt object, along with the Sun (yellow dot at the center) and the four giant planets (red dots). The best known object out there is the dwarf planet Pluto. Keeping it company are Eris, Makemake, Haumea, 2007 OR (give this poor guy a name, already), Quaoar (the object with the most contiguous vowels in its name), and Orcus. Up until the 26th, only five of these dwarf planets (okay, so some are listed only as “probable” dwarf planets)  had moons. Makemake makes number 6. 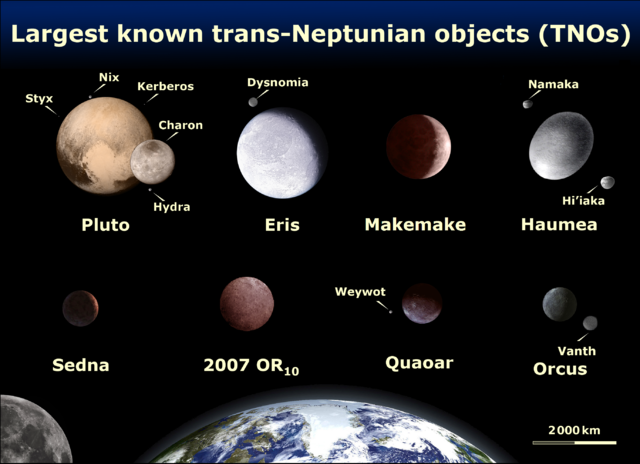 The newly discovered moon is called MK2 – it needs a good name too. Makemake is an ice planet of froze methane, and is very bright compared to other Kuiper Belt objects – only Pluto is brighter. Compared to Makemake, MK2 is very dark and dull in color, which made it tough to see against its host planet’s shine. The darkness stems from the fact that it more comet-like than moon-like. Its gravity is too low to hold on to any ice that sublimates into gas in sunlight then back to ice in darkness. It just floats away, leaving Mk12’s dark, rocky crust on the surface. The moon is very small – about 100 miles across – and its orbit is very close to the planet at only about 13,000 miles.  It goes around the planet about once every 12 days. 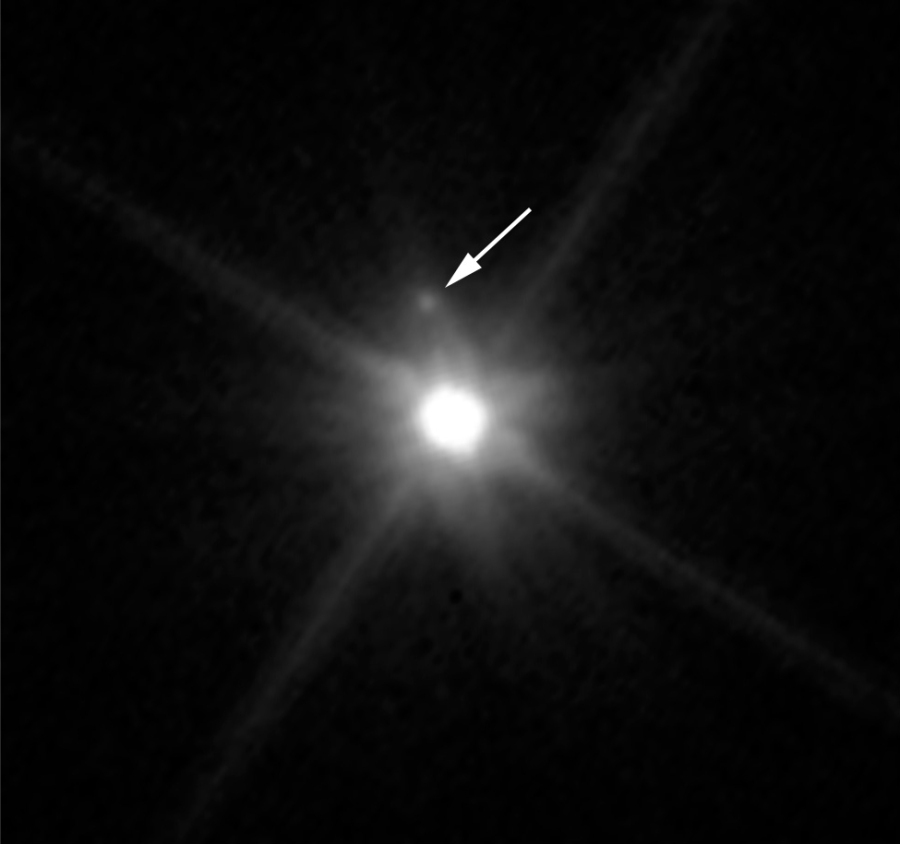 Why is This Moon Important?

Discovery of a new moon isn’t going to change the way we live our lives, but it will help planetary scientists uncover more about the outer solar system. It’s also very important for Makemake. Until now, the poor dwarf planet had no way of knowing its mass. Now with a moon to gauge its interaction with, scientists can uncover how dense it is, which will help understand what its made up of. When Pluto’s moon Charon was discovered in 1978, the resulting calculations revealed that Pluto was hundreds of times less dense than originally thought.

To many, this discovery will be lost in the myriad of tweets, emails, texts, or whatever messages that pass them by every day. It isn’t something that will change the way we look at the universe, or help us understand our origins. Yet for a few of us, it’s really, really cool and another piece of the puzzle to unlocking the secrets that await us in space.