A few months ago I wrote a post on Bigelow Aerospace’s B330 inflatable space module, and how the technology could facilitate trips to Mars. Inflatable modules offer more space for less launch weight than rigid ones, allowing more payload to be carried. When launched, the B330 will have 330 – hence the name – cubic meters (12,000 cubic feet) of internal space. All of this is done with material that offer equal or better ballistic and radiation protection than current rigid materials. 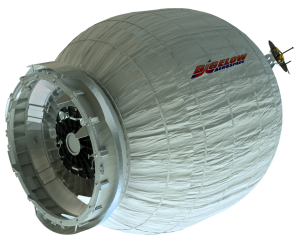 In less than two weeks, a much smaller version will be launching to the International Space Station for a test of the technology. Called BEAM – Bigelow Expandable Activity Module – this test unit is much smaller than the B330 Bigelow hopes to take to production, with only 565 cubic feet of space. Once connected to the ISS, very little activity will take place inside the module during the two year test. Instead, pressures, temperatures, and radiation readings will be periodically checked to determine the long term viability of inflatables.

On April 8th, BEAM will be inside the unpressurized trunk of a SpaceX Dragon spacecraft as it makes its eighth resupply mission to the ISS. It will be interesting to literally watch the mission unfold.