NextIs This the First Step to Curing Cancer?
AstronomyAstrophysicsSpace

Between 25,000 and 28,000 light years away is a super-massive black hole. It weighs in at more than four million times the mass of our Sun. No matter escapes it. No light escapes it. It has captured billions of stars that orbit around it to form our galaxy. It’s a giant – and compared to the black hole just discovered by Hubble, it’s child play.

About 300 million light years away, at the center of galaxy NGC 4889, lives a monster – a black hole that is possibly the largest ever found. The Milky Way’s galactic core is 44 million kilometers across, or just under 1/3 of the diameter of Mercury’s orbit (the long axis). The newly discovered black hole measures an estimated 130 billion kilometers – that’s billion with a capital B. To put that in perspective, you could fit the entire orbit of Pluto inside it – more than seven times over. It has the mass of 21 billion of our Suns – again, there’s that billion with a B.

Let’s do some comparisons. You know those tiny little dimples on a basketball?  Let’s say one of those was the Earth. By comparison, our Sun would be about the size of the basketball. 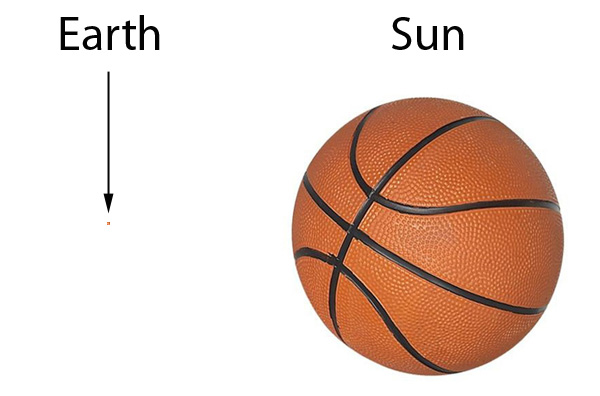 The black hole in the center of our galaxy would be about the length of three point area of the basketball court. 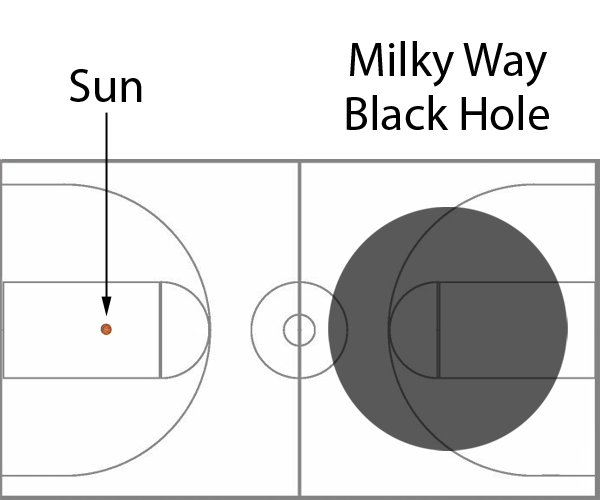 The newly discovered black hole would be, not just the size of the entire Madison Square Garden (loosely keeping with the basketball reference), but of the entire length of the island of Manhattan – doubled!