So why are launch and reentry both so dangerous? 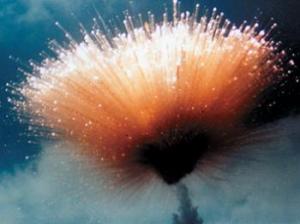 First let’s talk about what it takes to get to orbit. Basically you need speed – a lot of it. Remember when you were a kid and you’d fill a bucket of water then swing it over your head? If you did it too slow, the water would simply fall out on you. If you did it too fast, the handle would break and the bucket would fly off and hit your friend in the head. Do it just right and the water stays in the bucket as you swing it around. Picture you as the Earth, the water as the spacecraft that needs to get to orbit and your arm/bucket handle as gravity. If the space craft can get to just the right amount of speed then the same forces that keep the water in the bucket, keep the spacecraft from falling back to Earth. For low Earth orbit, the velocity a spacecraft needs to get there is about 34,000 km/h (or just over 21,000 mph). To stay there it needs less (slightly more than 28,000 km/h or just over 17,000 mph). To get to those speeds, you need a really big engine and a crap-ton of fuel. For the space shuttle, it took two solid rocket boosters with about 1.5 million pounds of thrust each. Solid rockets are sort of like the rockets we used to shoot off as kids. Once the fuse is lit, the rocket goes until it burns out. There is no stopping it. The shuttle also used three hydrogen-fueled main engines at about 750,000 pounds of thrust each. The main engines needed as much as 395,000 gallons of hydrogen fuel to help carry the shuttle/orbiter to orbit. In other words you had the equivalent of a big bomb with two roman candles strapped to it. As the Challenger disaster pointed out, that combination can be dangerous. While I was at NASA I got to witness first hand another example of how dangerous the combination could be when a Delta rocket exploded only seconds after liftoff, spraying burning solid rocket fuel for miles around – I was only about three miles away, but was far enough out that I didn’t need to run for cover. Still, the site was awe inspiring and very telling. The Delta rocket (all series) is one of the most reliable launch vehicles with a high 90s percent success. The space shuttle had a 98.5% launch success rate. Sounds high, but compare that to commercial aircraft where you have a 99.9999996 success rate and it seems that it’s not quite high enough.

Reentry is also a dangerous phase of space flight. Part of what makes existing modes of reentry dangerous is that they are unpowered. Remember that speed that keeps a spacecraft in orbit? To drop out of orbit, a spacecraft performs a retrograde burn (meaning opposite the direction of orbit) to slow down. As it slows, it no longer has the speed necessary to stay in the same orbit so it drops lower. Then it hits the upper atmosphere and the drag from the thin air slows it even more, so it drops even more until it falls into thicker air. Then it slows more, etc. As it hits the air it heats up due to the friction of the air against the spacecraft surfaces. This is where the danger comes in. If any of the heat shielding is damaged then that heat gets through to vulnerable structure and you get an accident like Columbia. If the burn isn’t quite right then perhaps it falls too steep into the atmosphere. Steeper means it hits thicker air more quickly which means it heats up more quickly too. That can mean exceeding the capability of the heat shielding and the spacecraft burns up.

How can we make both the launch and reentry phases safer and more reliable? I believe the key is in finding a more efficient fuel/engine combination. If we can take that 395,000 gallons of fuel and reduce it to a more reasonable number that is very efficient then perhaps we can use less in getting to orbit and save some for reentry and flight back to Earth. Why is that important? Gone would be the precipitous drop into the heat-inducing atmosphere and hence the primary danger involved with reentry. Instead the spacecraft could direct some of its thrust to keep it at a high altitude in thinner air, allowing it to lose speed at a slower rate and avoid much of that heat.

One engine currently in design is the SABRE (Synergistic Air-Breathing Rocket Engine). I won’t go into all the details, but it looks to be a promising attempt at an engine that could realistically be a safe alternative to the massive (and dangerous) rocket engines in use today. In my upcoming book I reference an advanced fictional version called SCORPION or Super-Cooled Orbital and Reentry Propulsion-Ion). While my engine is fictional and SABRE is still a long way from being operational, it is my hope and belief that in our lifetimes we will see such become reality. With such will come safer and more routine access to space which I believe will open it up for more manned exploration.